Alert to ALL who manufacture, import, export, or store Ammonium Nitrate

The recent tragedy in Beirut with the catastrophic destruction of most of the Port and a large part of the city should provide a serious wake-up call for all chemical manufacturers, importers, and storage facilities. Is this or a similar tragedy likely to occur in South Africa ?

There are many well documented disasters from Ammonium nitrate over the past 100 years – see attached timelines. This material should be treated, handled, and stored with the utmost respect as oxidisers can rapidly react with incompatible materials – hydrocarbons and organic materials to produce runaway fires and explosions BUT need a trigger to set them off.

Ammonium nitrate is classed as an oxidiser and explosive, potassium nitrate and sodium nitrate are also classed as oxidisers and components of fertilisers which have been implicated in various chemical disasters over the years, including the;

Tianjin catastrophe in China almost exactly 5 years ago on 12 August 2015 where the central explosions created a crater approximately 66m x 54m and over 170 people died, and  the –

Rhine Warehouse fire and disaster in Basel on 1 November 1986 which was reported to have started with a small fire involving nitrate based fertilisers that spread rapidly to a pesticide warehouse producing highly toxic fumes across the 3 adjoining countries Switzerland, France and Germany, and sadly thousands of litres of polluted water were inadvertently washed into the river by the firefighters! 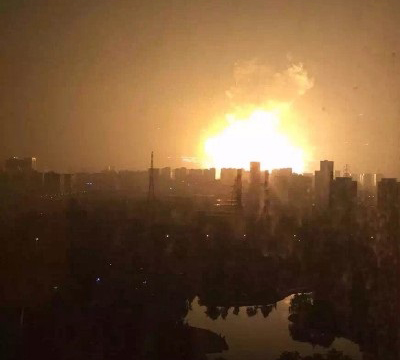 While we await more clarity on the root cause of what started the fire which caused to the ammonium nitrate to explode so violently, let us give thought to what we can do to prevent such disasters happening in our region.

Ammonium nitrate, UN 1942 (UN 2067 AN based fertilizers) is regulated in SA under the Explosives Act No 26 of 1956 and its regulations. Import, export, and transport into and through the Ports is well regulated by the SAPS Explosives Division.

BUT what about warehousing and storage in the vicinity of the Ports and other regions, also mis-declared cargo can play a major role in chemical disasters where unknown cargo can accidently cause a serious interaction with other incompatible products with disastrous consequences.

Warehousing is an area of serious concern in the periphery of the Ports and other light industrial area as many were not designed for storage of chemicals – remember the south Durban Warehouse fire on 24 March 2017 which caused black smoke to cover large areas of the city from near Bayhead to as far north as Ballito for several days, requiring some communities to be temporarily evacuated!

What may be lurking from years past, and what condition could it be in? The answer is a need for full inventory and Audits together with permitting of ALL warehousing that stores chemicals, together with:

RPMASA is the Leading Industry Association in Southern Africa, and the only one from Africa with seat on UN Committee of Experts for Transport of Dangerous Goods and the GHS, therefore up to date on the latest and coming changes to global & modal regulations.

It provides Industry and Government with:

RPMASA has a wide network of colleagues from International Industry and Government.

It has MOA partnership agreements with the Chemical Distribution Institute www.cdi.org.uk  and ICHCA the International Cargo Handling Coordination Association www.ichca.com to promote safety in Packaging, Packing, Storage and Transport.

RPMASA launched the CDI International Marine Packed Cargo Assessment Schemes in SA in 2017. These include Audit schemes for Warehousing and Freight Forwarders as well as Port Terminals to help them Benchmark their level of safety, efficiency, and compliance, and set improvement plans to achieve global excellence.

Implementation of these Assessments by ALL chemical warehousing would be a great start to identifying and eliminating potential risks in warehousing, provide peace of mind to those who store, and to the surrounding communities.

Unfortunately support and participation for these Assessments and for our Training courses has been poor – evident in the high number of chemical related incidents and accidents! The lack of cooperation from other Industry Sector Associations to encourage Members participation and promote the benefits is lamentable to say the least!

It is time for all Industry Sectors to stop working in silos and to work together to prevent potential future disasters and tragedies!!

Ignorance and avoiding compliance with the Regulations and Best Practice is NOT ACCEPTABLE and could be waiting for a serious Disaster to occur!

It is URGENT to embrace

Nitrates are under the spotlight BUT there are other potentially dangerous chemicals manufactured, imported, and stored in SA too!!

Product Stewardship and Producer Responsibility mean sharing, caring, and working together for the good of all – Remember we are all part of a community which needs to be protected!